It all started with annoying messages that nobody seems to understand (/var/log/syslog):

What is this problem about FIFO (first-in-first-out) underruns? What is a transcoder? What is PCH? What is a DRM? The following quest will try to find some answers…

What do I actually have residing in my laptop? First of all, it is important to know what to search for. There are three basic components that we need to know, namely, what is:

I have a N56VZ which has an i7-3610QM processor. The processor architecture is from the Ivy Bridge variety (on 22 mm). There are plenty of datasheets available for the 7-series chipset (pdf). Note also that this Ivy Bridge series is also called the 3rd Gen Intel Core family (see also this Intel Datasheet (pdf)).

The chipset that is used in tandem with this processor is, some people state, the HM76 chipset. In particular, the BD82HM76 PCH. This “PHC” is known under the name Panther Point.

So, what we have here is a hardware setup that is divided over the CPU and a thing called a PCH. PCH stands for Platform Controller Hub. There are some nice pictures in a presentation (pdf) on the 2nd Gen processors, which show how both the CPU and the PCH are integrated in the same chip (but on separate dies). The PCH of this previous generation is called Cougar Point. 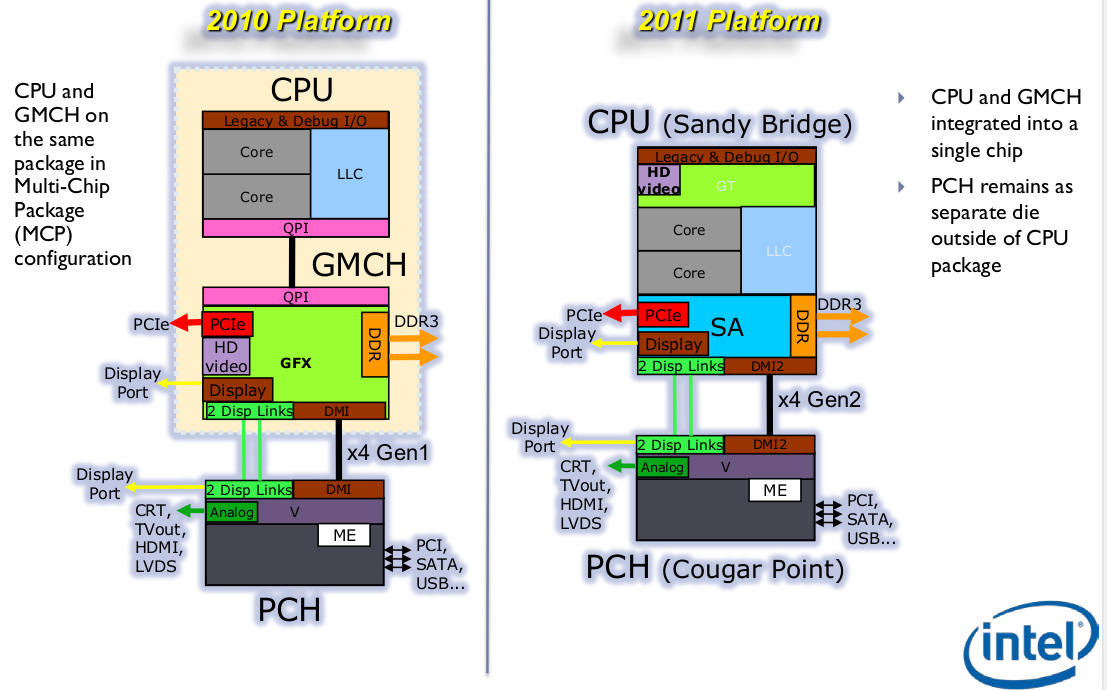 Another picture from Intel shows the Panther Point PCH: 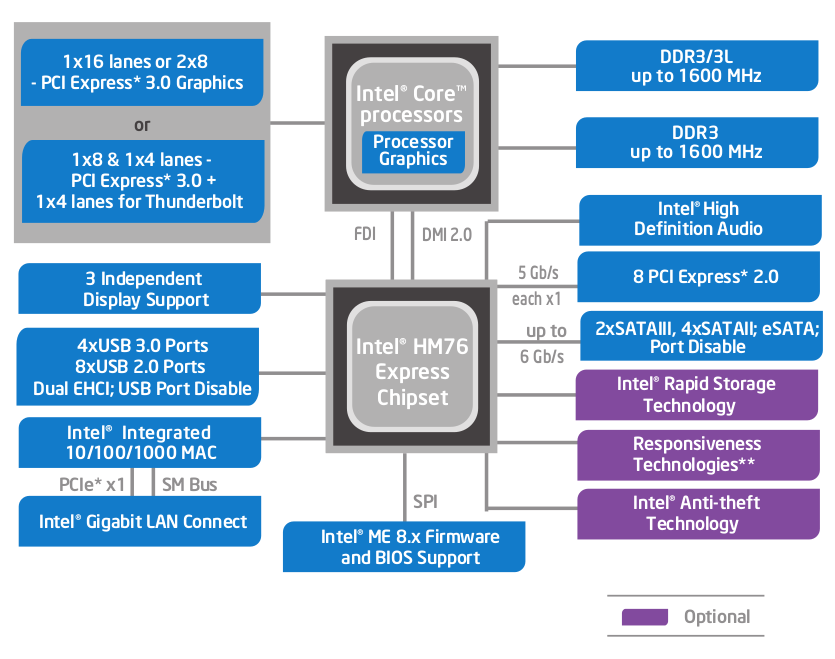 The Intel integrated graphics unit in my Intel Core i7-3610QM system is a HD Graphics 4000 running on 650 MHz base speed and 1100 MHz turbo speed notebookcheck.net. The HD Graphics 4000 is an Intel HD variant compatible with the Ivy Bridge line of processors.

So, how does Linux address this integrated graphics card? The first entity we encounter is the DRM (Direct Rendering Manager). The DRM provides a single entry point for multiple user-space applications to use the video card. 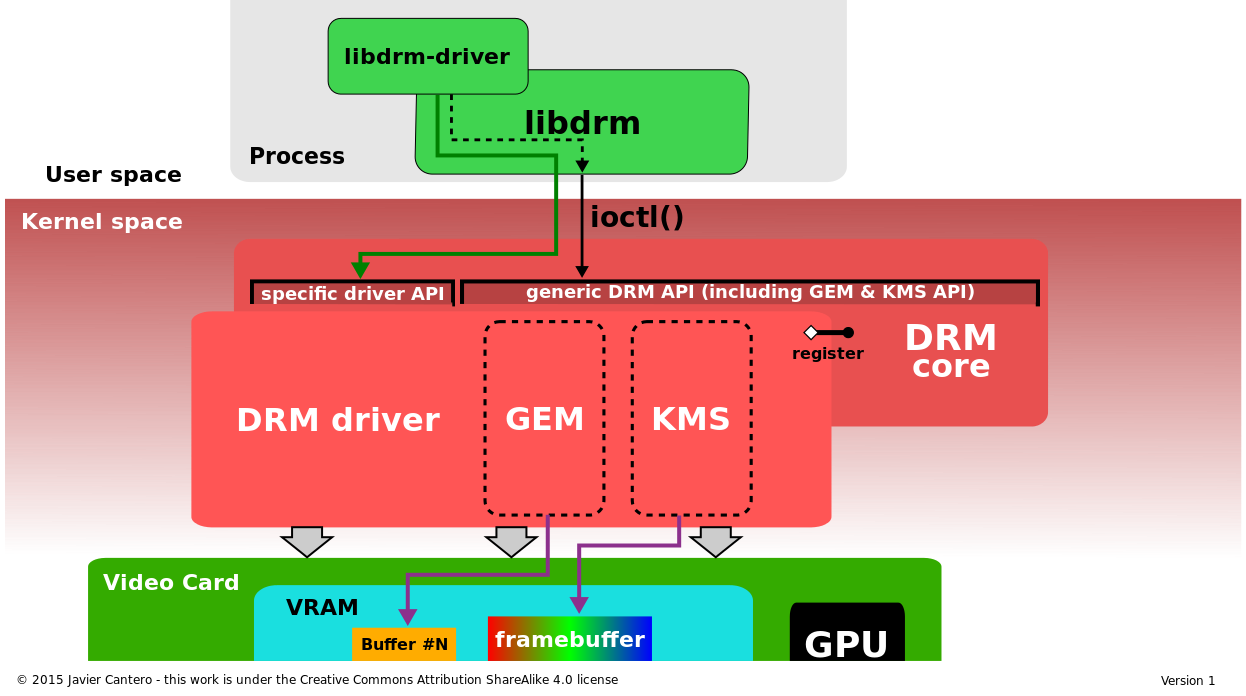 The Direct Rendering Manager has a DRM core that is independent of the specific drivers required for whatever type of hardware that is on your system. It provides the interface to user-space code. A driver consists out of two parts, GEM (Graphics Execution Manager) and KMS (Kernel Mode Setting). GEM has been developed by Keith Packard and Eric Anholt (see lwn.net) from Intel.

The reasoning behind GEM is pretty interesting. It tries to remove latency as much as possible, which is nicely visualized by the following picture.

KMS allows to set display modes, as its name betrays, from kernel-space. A user space graphics server (like X) does now also not need superuser rights anymore (in theory). The display mode concerns matters such as screen resolution, color depth, and refresh rate. Of course, the functionality of GEM and KMS could have been implemented in a single software entity, but there are technical reasons not to do so (basically to account for split hardware).

Laurens Pinchart has a nice presentation on DRM, KMS, and in particular, writing drivers at YouTube. The picture below is from his presentation. 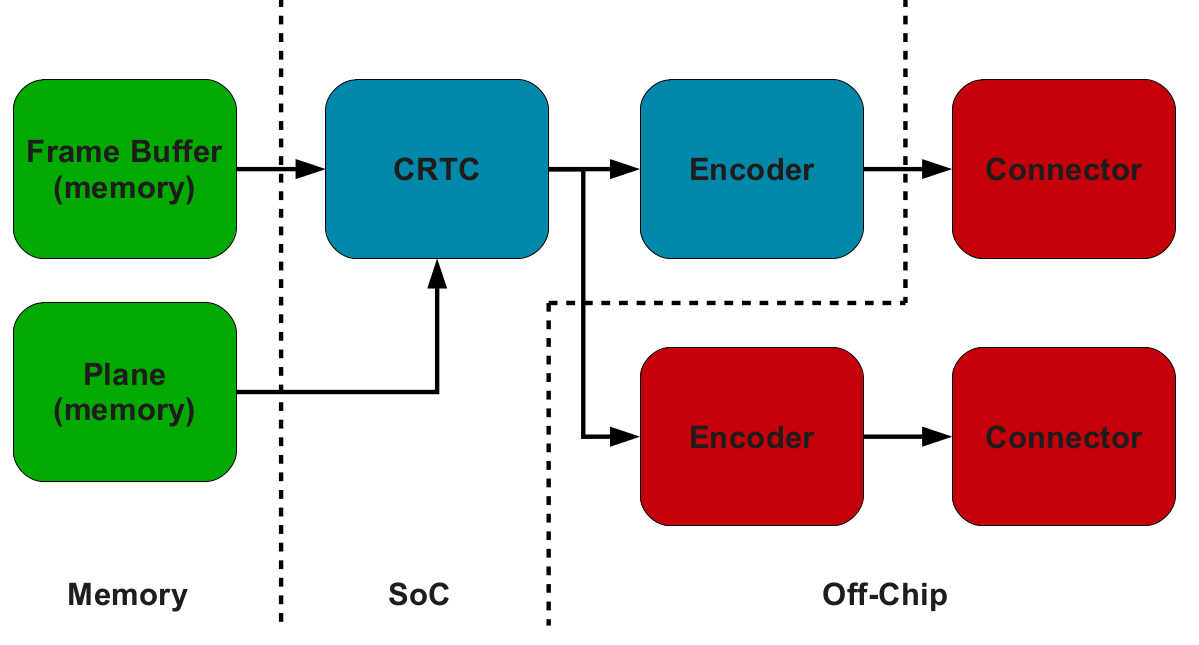 You see that in memory there are two structures, frame buffers (old) and planes (new). Subsequently, you see something that sounds very old-fashioned, a CRTC (Cathode Ray Tube Controller). This is just nomenclature from the past. It is basically a reference to a scan-out buffer, a part of (Video) RAM that will be displayed on your screen. It also has (a reference to) a display mode, offsets into the video memory, etc. The controller links to an encoder (which can be off-chip). If it links to multiple encoders, these will receive data from the same scanout buffer, so they will display the same, cloned, data. The connectors, finally, can be only connected to one encoder, and know how to talk HDMI, TVout, CRT, LVDS, etc. It also has the information about the display, EDID data, DPMS, and connection status. Make sure to read also the man-pages about drm-kms.

Startup with drm.debug=14 (or if you’re a hexademically inclined person, drm.debug=0x0e) and you will get plenty of debug information from the DRM. For example, that we have the Panther Point PCM is indeed confirmed in the syslog:

Just pore over the information yourself, restarting your computer with this debug flag. You will see for example how many display pipes are available (3 in my case). It will enable something like ENCODER:31:LVDS-31 and CONNECTOR:30:LVDS-1. And you spot how there are several connectors to choose from:

Something interesting to our errors are latency settings:

At virtuousgeek some matters are explained around power management of displays. For example memory can enter self-refresh in which it consumes way less power. The display plane FIFO watermarks can be set conservatively, however, this leads to long periods in which self-refresh doesn’t happen. It can be set aggressively, FIFO underruns can occur. See this nice FPGA implementation of a FIFO buffer to understand watermarks in more detail.

Now, we know what kind of hardware we have, let us first try to blindly apply the newest kernel from Intel…

We try to run the newest kernel from the guys who are concerned with incorporating the lastest changes from Intel using the drm-intel-next packages from kernel.ubuntu.com:

Installing this kernel (contrary to just kernel 4.0.0 RC7 for example) leads to trouble. Moreover, the same error about underruns on the transcoder occurs… So, this is not something already being addressed… And that’s all we wanted to know. So, we go back to the default kernel (4.0.0-040000rc7-generic #201504142105 of April the 14th).

This gives me an idea. Let’s disable some of the power saving options of the i915 kernel module.

Subsequently I tried the option i915.enable_fbc=1 (to see if compression would lower the bandwidth and hence lead to fewer underruns). The rigorous option i915.powersave=0 didn’t work as well. There is an option i915.enable_rc6=3 on my system. I set it to 0, but I guess powersave overrules all that anyway. Also setting i915.fastboot=1 doesn’t get rid of the underruns. All this is not a very thought out approach anyway…

If you git clone git://kernel.ubuntu.com/virgin/linux.git v4.0-rc7, and navigate to drivers/gpu/drm/i915 you will encounter a file intel_fifo_underrun.c which supports underrun detection on the PCH transcoder. It is the last function in the file:

It is nice that the message will be only displayed once. This is initiated through the IRQ from the Intel graphics unit. And, of course, this is at the end: it’s only the guy reporting the bad news.

The intel_display.c has a suspicious statement about Gen 2 chips:

Of course, this is reporting about underruns for the CPU, not the PCH, and it is Gen 2, not Gen 3 of the chips. But it might be a symptom of something peculiar in the hardware.

In the North Display Registers document you see a nice overview of the sequence in which the display needs to be set.

You can follow along in the code, in particular, in the function ironlake_crtc_enable. Here you will see an order like intel_enable_pipe -> ironlake_pch_enable -> intel_crtc_enable_planes. What is remarkable is that step 7 in which the planes are configured is done after the port on the PHC is enabled in the code. In the haswell code, this is the same, but this function is preceded with haswell_mode_set_planes_workaround. It is also interesting to note that the “Notes” in this table state that the CPU FDI Transmitter should not be set to idle while the PCH transcoder is enabled because it will lead to PCH transcoder underflow.

On bugzilla there are several bug reports on the FIFO underrun, such as 79261. However, none of them seems to be about the HD Graphics 4000 in particular, and even less providing any solution. A patch for ArchLinux just makes DRM_DEBUG messages from the DRM_ERROR messages.

What I can think of are only a few things (because I don’t understand much of it, yet):

My issues aren’t solved, so I’ll need to delve further into details some other time.

David Herrmann for example is the guy behind render nodes (integrated since 3.17).

The Intel 7 Series PCH datasheet contains all kind of interesting information. See for example Fig. 5-13 for another view on the display architecture.