A long, long time ago - namely, in terms of these fast moving times of advances in deep learning - two years (2016), there was once a paper studying how we can teach neural networks to count.

This has been a personal interest of mine. I felt it very satisfying that bees for example can count landmarks or at least have a capability that approximates this fairly good. It is such an abstract concept, but very rich. Just take the fact that you can recognize yourself in the mirror (I hope). It’s grounded on something that really strongly believes that there is only one of you, that you are pretty unique.

From a learning perspective, counting feels like mapping in autonomous robotics. The very well-known chicken and egg problem of simultaneous localisation and mapping (SLAM) immediately addresses that mapping and localisation is an intertwined problem where one task immediately influences the other task. To properly map it would be very useful if you have good odometry and can tell accurately how your location is changing. To properly locate yourself it would be very useful to have a very good map. In the beginning the robot sucks in both, but by learning (for example through expectation maximization) it learns to perform both better and better.

Counting objects likewise benefits from properly being able to recognize objects. Moreover, it also likely benefits from localization objects. A child counts by pointing to the objects and even sometimes verbalizes the object in the process. Of course a network might do all three things in different layers, but that would remove the chance to have these layers to inform each other. If we introduce cross-connections manually the network would not learn to decompose in an autonomous manner. Ideally the network learns the decomposition itself so that we do not artificially introduce limitations in the information transfer between those tasks.

The paper by Eslami introduces several aspects that is important for a system like this:

It is coined the AIR model by the authors: attend, infer, repeat.

The representation of a scene is with a fixed upper limit on the number of objects. A nice extension would be to make this a nonparametric prior like a Dirichlet Process. The number of objects is drawn from a Binomial distribution, \(p_N(n)\), and the scene model generates a variable length feature vector \(z \sim p_\theta(\cdot|n)\). The data itself is generated from the features through \(x \sim p_\theta(\cdot|n)\). Summarized:

with the prior decomposed as:

The posterior is given by Bayes’ rule, prior times likelihood divided by the evidence:

We approximate the posterior variationally by a simpler distribution \(q_\phi(z,n|x)\) using the Kullback-Leibler divergence:

The divergence is minimized by searching through the parameter space \(\phi \in \Phi\).

An iterative process and a stopping condition

One difficulty arises through \(n\) being generated through a random variable. This requires evaluating:

The first term describes the stopping condition. If \(z_{present} = 0\) then there are no more objects to detect. The second term contains a conditional on previous objects. We do not want to describe the same object twice!

Now, we have to calculate \(\frac{\partial \mathcal{L}}{\partial \omega^i}\). Remember \(\omega_i\) can contain either continuous or discrete variables. With continuous variables the reparametrization trick is applied. With discrete variables a likelihood ratio estimator is used. The latter might have high variance with is reduced using structured neural baselines.

The results on a multi MNIST learning task can be seen in the next figure. 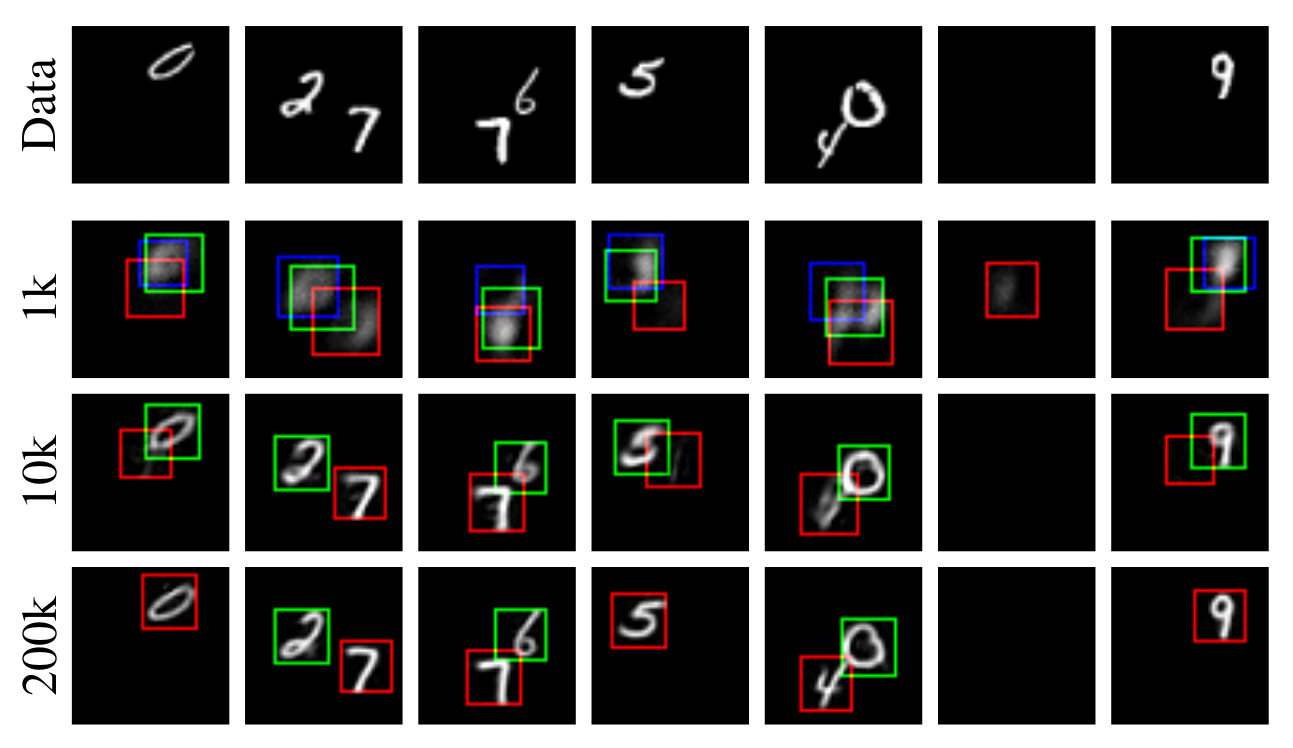 The figures shows how the system properly recognizes multiple visual digits from the MNIST training set. The boxes show attention windows. From top to bottom there is a steady improvement in count accuracy over time.

What do we learn from this?

If we would use this architecture would we be surprised that the network learns to count? No, I don’t think so. We pretty much hardcoded this in the architecture.

An interesting observations by the authors concerns generalization. When the model is trained on images with up to two digits in a multi-MNIST task, it will not generalize to three digits. Likewise if it is trained on images with zero, one, or three digits, it will not be able to handle images with two digits. Another architecture change has been applied with the recurrent network fed by differences with the input \((\omega^i,h^i = R_\phi(x^i - x, h^{i=1})\). The author coin this the DAIR model rather than just the AIR model.

The authors compare the system with the Deep Recurrent Attentive Writer (DRAW) architecture. The latter exhibits good performance with the same counting task. Where it lacks is a task where a task of counting zero, one, or two digits is followed by another task using two digits. That other task is a) summing the two digits, or b) determining if the digits are in ascending order. Here the AIR model outperforms DRAW.

One the things that is interesting from the neuroscientific literature is the concept of subitizing. It might, or might not be the case, that it is faster to count up to four than upwards from four. Over four there is a sequential process like the one described in this blog post. Some scientists think there is a different pathway that allows a more instantaneous response if there only a few objects.

The paper titled “Subitizing with Variational Autoencoders” by the authors Rijnder Wever (github) and Tom Runia from the University of Amsterdam describes subitizing as an emerging phenomenon in an ordinary autoencoder. A supervised classifier is trained on top of this unsupervised autoencoder. It is not entirely clear to me that the latent representation indeed somehow disentangled the object identification from the number of objects.