If you’re interested in how things work, our brain is one of the most intriguing devices around. I love reverse engineering stuff. Understanding limits and colimits within category theory can be just as rewarding as getting to terms with the intricate structure of the brain.

The thalamus is, hmmm, particular shaped, and centered in the middle of our head, resting on our cerebellum. 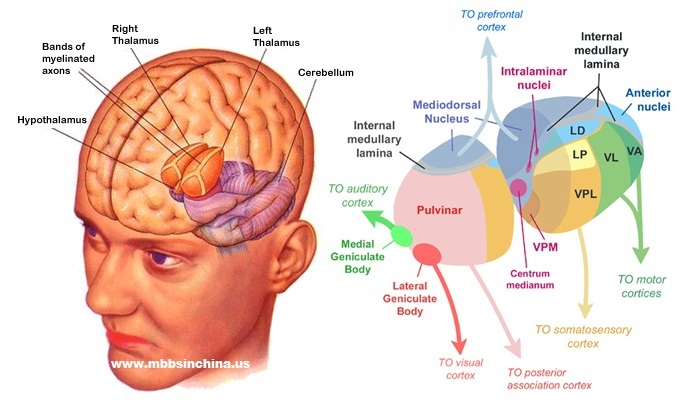 One thing that is very interesting of the thalamus is that it has a thalamic nucleus (a bunch of neurons) for every type of sensory system (see also 5):

There are some other inputs as well, such as from:

It is quite interesting that the pulvinar nuclei are quite big in humans (making up 40% of the thalamus) compared to cats or rats. Lesions can lead to attentional deficits. This part also seems to influence the onset of saccades.

Quite remarkably however is how neatly this has been organized. Lesions at the cortex (thank fast and precise bullets of the first world war for these) lead to very fine lesions at the retina all the way through the thalamus. All intermediate neurons die slowly off because of a lack of input of higher levels (called retrograde cell degradation). The interesting thing is that this death is very local. Apparently there is a very strict map from the retina onto the thalamus (the lateral geniculate nucleus) and onto the primary visual cortex. It is incredible that this has been already completely organized before our eyes open as babies!

Note, that it is not always easy to find out the nature of a map. In the early stages of the olfactory system, for example, maps represent groups of chemicals that are similar on a molecular level.

The thalamus isn’t limited to being a relay station to the cortex (see 2). Apart from inputs (often called afferents in neuroscience) directly from our senses, the thalamus receives back connections from the cortex. This is very interesting from an architectural point of view. First the thalamus projects unto different parts of the cortex, and then these parts project back on the thalamus… There must be something interesting going on in the thalamus!

Not considering the particular properties of the modality that is processed, this allows someone to daydream about what the thalamus might be doing. The information bottleneck method introduced by Tishby introduces bottlenecks in for example networks on purpose. A bottleneck in a neural network is formed by pruning a lot of connections in a fullly connected network such that there are a few neurons left through which information necessarily has to pass if one part of the network needs to communicate with another part of the network. In a layered network, such neurons form a “bottleneck layer” with fewer neurons than in the other layers. By doing this the designer of the network forces representations to be expressable by only a small set of neurons. In machine learning this can be understood as a form of dimensionality reduction. A high-dimensional function is represented using only a few (nonlinear) units. A typical form of dimensionality reduction in standard machine learning is by picking a limited number of orthogonal dimensions in the data with high variance using principle component analysis. Using neurons to do dimensionality reduction however is more akin to autoencoders (revived in deep learning) in which there is less control of the form of the “bottleneck representations”.

But… all this is nice theory from a computer science perspective. Neuroscientists of course don’t care: they want to explain actual biology. The next figure is about the vibrissal system: the neural circuitry around whiskers!

The question at hand: Do neurons in the thalamus merely relay information or do they process information. For a computer scientist this seems a silly question. However, what is meant with this is the following. A “relay function” might actually improve the signal to noise ratio as in a repeater station, or optimize bandwidth, or other such functions as long as the content of the signal is not adjusted. A “process function” would be basically everything else… In the above study which mainly reiterates the findings of Groh et al. (2008) it is described how for the whisker system a phase-locked loop is implemented, well-known by all engineers in the world (since Huygens). By making sure that the deviations between input and output phase get minimized it naturally follows that the frequencies of the input and output will be synchronized. Hence, the thalamus-cortex circuits will oscillate on the same frequency as the physical “whisking”.

Quite disappointing from a machine learning perspective… We had hopes on some abstract processing going on, such as dimensionality reduction, and we are left with phase-locked loop… But, do not dispair! This is just a single modality. Perhaps the thalamus fulfills widely different functions for different modalities.

Other studies such as that of coughing (see 3), neither identify the thalamus with some generic function. This study by the way is a bit sickening. A genetically altered herpes virus is used to trace signal pathways in the brains of mice. The virus jumps from one neuron to the next through synapses as would a normal signal as well.

A study by Crosson is broader in scope. First, it addresses the two ways in which neurons in the thalamus fire. If the neuron is under a larger negative potential (polarized) compared to its surroundings, it emits bursts of spikes. If, however, the neuron has a smaller negative potential (depolarized) compared to its environment, it linearly sends its inputs to its outputs. The latter might be seen as a form of high-fidelity information transmission, while the former does only convey some low-fidelity information. It might be related to the difference when someone is paying attention. The two different forms are often called “burst” mode versus “tonic” mode. You might think, but if there are bursts of spikes, it seems more information can be transmitted! The reason why this is not the case is because bursts are quite regular, it could just have been called “oscillatory” mode as well. During sleep most neurons in the thalamus are in burst mode.

The author addresses also the hypothesis of Sherman and Guillery in which cortex-thalamus-cortex connections are suggested as “drivers” (sending over information), while cortex-cortex connections are “modulators” (determining the weight, importance, or actual arrival of this information). This seems like the architecture as postulated by Baars and implemented by Franklin, the global workspace theory, although the latter is cast in terms of “consciousness”, which isn’t the smartest way to objectively speak about and study brain architectures. Global workspace theory adds to this architecture a sense of how modulation would be implemented, namely by inhibation between competing cortex areas, enabling only a subset of cortex-thalamus-cortex connections to be active at any time. Crosson postulates a function for the cortex-thalamus-cortex route that in my opinion is not so different from this architecture, namely that the thalamus can prioritize and pay “attention” or give priority to one part of the cortex above the other. The difference might exist in the nature in which such a winner-take-all is implemented. Is it through the thalamus as central hub who integrate all votes from all cortical areas and then decide who’s next on stage? Or is it through inhibition from cortical areas to each other? This type of research cries on input from voting network models and consensus theory from computer science.

Note, that there is no reason to subscribe a conscious seat to the thalamus. Although the thalamus has to do with attention and might enable the brain to modulate conscious processing, there are reasons to assume that (conscious) experiences arises from a thin sheet of neurons underneath the neocortex, named the claustrum. Watch in this respect the below video featuring Koubeissi’s experiment with an epileptic patient:

In all cases, it must be ensured that a (majority) vote should be a temporary event. The same piece of cortex winning all the time means neural death for the rest of the cortex. It is indeed possible to solve it by having cortex regions vote for each other (not only for themselves). This is for example proposed for winner-take-all networks in action selection. It is also possible to have infrastructure in place in which a winner “kills itself” through inhibition of return. In that case activation of a cortical area would automatically diminish its own importance by inhibiting its own afferents from the thalamus. This is the model postulated in the work on visual saliency by Itti et al. It is very hard to imagine an infrastructure which only would implement inhibition of return. In my opinion this would very likely be interwoven with the need of creating sequences of activation.

What is also very interesting to note is that nobody speaks about thalamus-thalamus connections. This means that the thalamus very likely does not play a role in sensor fusion.

I don’t feel science has progressed enough to unequivocally tell which layers are connected to which layers and how the thalamus plays a role in it. Commonly accepted is the pathway L4 -> L2/3 -> L5. However, very recently (see 7) it has been uncovered that there are direct connections from the thalamus to L5 as well. The thalamus seems to active two layers of the cortex in parallel.

There are many other facets of the thalamus to talk about. For example Adaptive Resonance Theory has been used to describe the nature of the cortex-thalamus loops. However, if I write about this again, it will be about a nice model that has temporal components as well as the ability to build up sequences. I haven’t found something with enough believable detail yet, so I’ll have to be patient till more is figured out.